Everybody has his or her opinions, and especially when it comes to anything as debatable as the pseudo-science of astrology, people have varied opinions - from believers to haters.

However, even the staunchest critics of astrology happen to know their Zodiac Signs - and this fact tells you a lot more about astrology than anybody can ever explain.

In simple words: Astrology, a field similar to astronomy, is the study of stars. And the circular Zodiac, as below, is a representation of the sky above us, used to study the influences of planets and points in order to estimate a possible terrestrial event that "might" occur as a result of the influences. 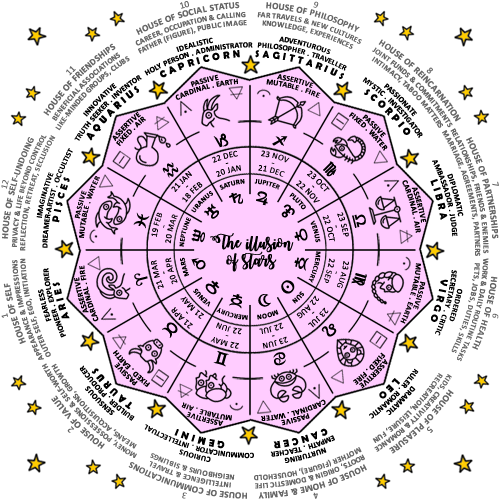 For us, astrology is none of them. Although it is an advancement of age-old practices and beliefs, modern astrological thoughts are practical and scientific. Astrology today is a knowledge-based expertise that deals with gravitational influences that have existed since the formation of Solar System, and have played a vital role throughout the evolution process - of life on Earth.

Marred by superstition and divination, the field of astrology originated as the first organized scientific study known to Mankind, and evolved along with astronomy. Back then, both astrology and astronomy were one and the same field of study, pursued only by the highest scholars. Now, astrology is fast evolving into a subject of science that its origin was meant to be. Modern astrology is about permutations (nPr), combinations (nCr), linear programming problems (LPP), and probability theory!

Today, astrology is more about 3-dimensional geometry - as in mathematics, calculating resulting force of impact for two or more forces of influence - as in physical science, analysing gravitational impacts on body chemicals - as in bio-chemical science, and co-relating with past actions (karma) and consequences - to reach optimal inferences that "might" occur, based on the possible "emotions" at play due to resultant influences of the planets.

It is no longer about beliefs, or about divinity. It is neither about spirituality, nor about mysticism. Modern astrology is an art to utilize scientific information to back-calculate and approximate a prediction - a past, present, or future event.

Modern astrology is the greatest application of astronomical science. However, as with any branch of study, astrology remains open to corruption and exploitation - both by amateurs without proper knowledge, and by experts looking for profits. Astrologers today have opted for diplomatic observations - so as not to offend anybody, and look to highlight only the ills to maximize their gains out of other's sufferings. The allure of knowing the future is, in itself, an exploitable means that attract lucrative offerings.

Throughout this web application, one will gain insights of possibilities. But if anybody believes a piece of stone, a couple of prayers (mantra), and/or religious rituals can counter the gravitational impacts of planets that are far bigger than the Earth itself - we wish them luck!