If we look at the night sky around 20th March, on Vernal Equinox, the stars that form the major constellations appear as depicted in the picture herein. 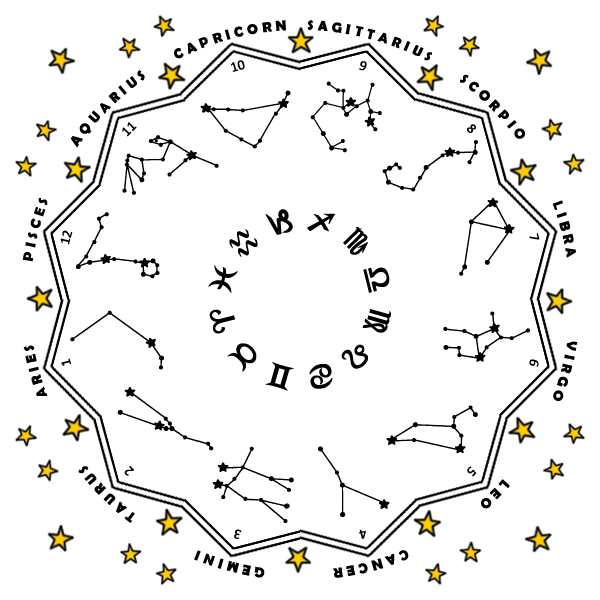 This happens every year, because the Vernal Equinox (also known as March Equinox) is the date when the Sun is exactly above the Earth's Equator, and the lengths of day and night are equal. This happens twice a year, as the elliptic (Sun's annual pathway) intersects with the celestial equator. In the Northern Hemisphere, this happens on March 20 or 21, as the Sun appear to move North. In the Southern Hemisphere, this happens on September 22 or 23, as the Sun appears to move South, commonly known as Autumnal Equinox or September Equinox.

The Sun "appears" to move! But we all know that it is the Earth that moves around the Sun. In astrology, the Earth is considered the center of context because it is the study of stars, and their implications on life on earth.

Similar to the Sun, the constellations appear to move around the Earth in a circular motion, as the Earth revolves around the Sun - once in every year.

The sky represents the circular Zodiac of 360 degrees, which is divided into 12 equal sections of 30 degrees each. Each of these sections is represented by a "Zodiac Sign" according to the 12 constellations. Hence, the names of the Zodiac signs, and thus, the symbols for each of the Zodiac signs.

This is an important representation for all studies of stars, including astronomy and astrology, because the constellations are so far away from the Earth that their positions are assumed as fixed and considered benchmarks for calculations - much like the North Star, that was used for navigation for centuries. All the planets of the Solar System (including the luminaries, Sun and Moon) 'appear' to revolve around this circular Zodiac representation of the sky. This representation of the sky through a 360-degree Zodiacal Wheel helps us to understand, explain, monitor, and calculate astrological and astronomical views. 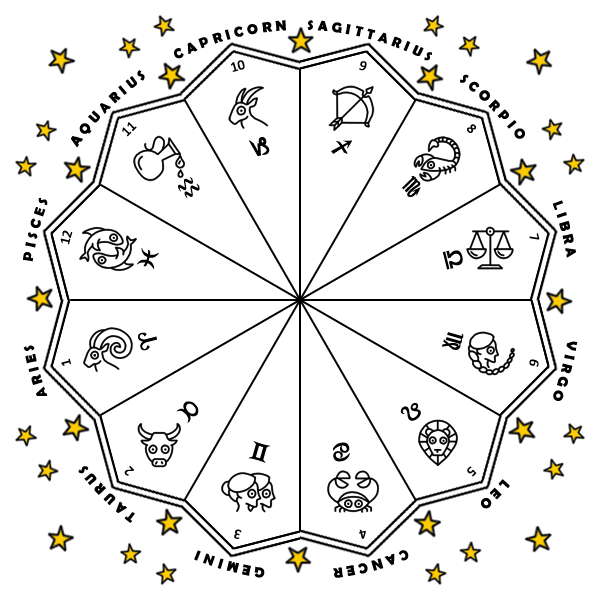 This is the reason, that the 360-degree Zodiac is represented as depicted by the picture herein, often referred as the Tropical Zodiac. This form of Zodiac representation has been in existence since 1st century BCE. Prior to that, the Sidreal Zodiac has been in existence, and continues to be used by many astrologers (including practitioners of Vedic Astrology, or Jyotisha). The Tropical Zodiac considers the cusp of Aries to the March Equinox, while the Sidreal Zodiac considers the point to the precision of the equinoxes.

As the name suggests, the Tropical Zodiac follows a Tropical Calendar of seasons following Ptolemy's definition of a yearly calendar based on seasons around 1st century BCE. The previous Sidreal Zodiac used stars to define a yearly calendar, based on Earth's revolution around the Sun. There is no right or wrong between the two diverse systems, and neither of them are constellational. If we consider the constellations, we would probably have 40 zodiac signs! The key constellations are used as benchmarks to divide the sky into 12 equal parts.

Now, as explained above, the sky is represented by the Zodiac, and that the Zodiac rotates once every year to match the revolution of Earth around the Sun, as the sky appears to rotate from the Earth's viewpoint. But the Earth also rotates around its own axis. So, the sky that one sees above from one location of Earth differs from another location farther away on Earth. As such the exactness of the Zodiac representation depends upon the location, and not just the time. The Earth, for geographical reasons, is divided into northern and southern hemisphere by the Equator - which is a virtual line the divides the Earth into two halves. The "Latitude" identifies how far north or south a location is from the Equator. Similarly, the "Longitude" identifies how far east or west a location of from the Prime Meridian. The real-time wheel of Zodiac is calculated based on sidreal time, and the exact location of an event (or birth).